The Week on Wall Street
The S&P 500 came within 0.1% of a record close Friday. Stocks were lifted last week by positive news on U.S.-China trade negotiations, plus earnings announcements.

The Nasdaq Composite posted the largest weekly gain of the three major U.S. stock indices. It rose 1.90%. Last week also brought gains of 0.70% for the Dow Jones Industrial Average and 1.22% for the S&P. The MSCI EAFE, a benchmark for developed stock markets outside the U.S., rose 1.14%.,,

Another Hint of Progress in Trade Talks
Friday, the Office of the U.S. Trade Representative stated that parts of a new trade deal with China were near completion. No specifics were given as of Friday’s close, but the USTR noted that negotiators had “made headway” on key issues.

Analysts think both sides may cancel certain tariffs as part of a deal. President Trump has said that he would like to sign a new trade accord with China’s President, Xi Jinping, next month.

A Gain for Consumer Sentiment
Rising to a final October mark of 95.5, the University of Michigan’s Consumer Sentiment Index advanced 2.3 points month-over-month. During August and September, the index’s level varied from 89.8 to 93.2.

What’s Next
The Federal Reserve meets this week. Will it make another interest rate cut? And if it does, could that be the last rate cut for a while? Traders will study the language of the statement and listen carefully to Fed chair Jerome Powell’s Wednesday press conference for clues.

Source: Econoday, October 25, 2019
The Econoday economic calendar lists upcoming U.S. economic data releases (including key economic indicators), Federal Reserve policy meetings, and speaking engagements of Federal Reserve officials. The content is developed from sources believed to be providing accurate information. The forecasts or forward-looking statements are based on assumptions and may not materialize. The forecasts also are subject to revision.

Source: Zacks, October 25, 2019
Companies mentioned are for informational purposes only. It should not be considered a solicitation for the purchase or sale of the securities. Any investment should be consistent with your objectives, time frame and risk tolerance. The return and principal value of investments will fluctuate as market conditions change. When sold, investments may be worth more or less than their original cost. Companies may reschedule when they report earnings without notice. 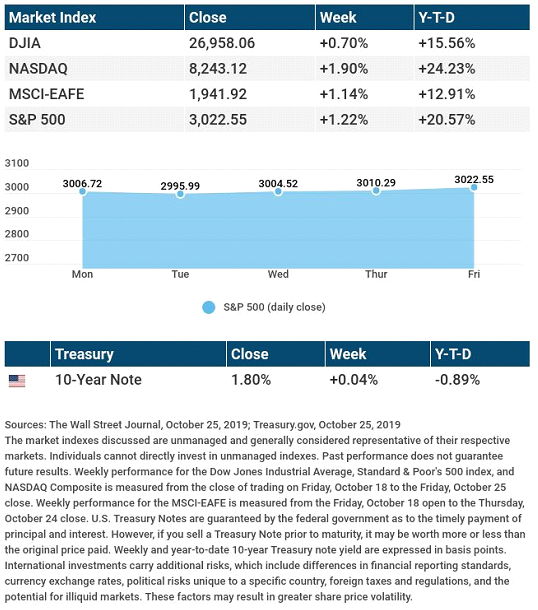