The Week on Wall Street
Stock prices pushed higher last week, as investors remained hyper-focused on any new developments with the U.S. trade negotiations with China.

Trade Winds
For nearly two years, investors’ moods have seemed to swing with each twist in the ongoing trade saga between the U.S. and China. Last week was no different.

On Tuesday, stock prices fell sharply on concerns that U.S.-China trade tensions had escalated. The White House announced the addition of 28 new Chinese companies to its list of firms that are banned from doing business in the U.S. Later in the day, White House officials confirmed that they had implemented travel bans on selected Chinese officials.,

But prices bounced back Thursday and surged higher Friday on White House reports that suggested the trade talks between the two countries were “going really well.” Near the close Friday, the White House confirmed that the U.S. has come to a “very substantial phase one deal” with China.,

Quarterly Earnings
Investors may start to get a better glimpse into third-quarter earnings this week, as more than 150 companies are expected to report on their operations.

As “earnings season” get underway, some attention may shift from the U.S.-China trade negotiations and toward company reports.

What’s Next
Some U.S. financial markets will be open, and some will be closed, on Monday, October 14, in observance of the federal holiday Columbus Day. The U.S. bonds markets and most banks will be closed. But the New York Stock Exchange and the NASDAQ will be open for regular hours.

THE WEEK AHEAD: KEY ECONOMIC DATA
Wednesday: September Retail Sales are reported before the markets open.
Thursday: Housing Starts for September are released. A “start” is defined as the beginning of excavation of the foundation for the building. Philadelphia Fed Business Outlook Survey. The survey can provide insights into the manufacturing sector.

Source: Econoday, October 11, 2019
The Econoday economic calendar lists upcoming U.S. economic data releases (including key economic indicators), Federal Reserve policy meetings, and speaking engagements of Federal Reserve officials. The content is developed from sources believed to be providing accurate information. The forecasts or forward-looking statements are based on assumptions and may not materialize. The forecasts also are subject to revision.

Source: Zacks, October 11, 2019
Companies mentioned are for informational purposes only. It should not be considered a solicitation for the purchase or sale of the securities. Any investment should be consistent with your objectives, time frame and risk tolerance. The return and principal value of investments will fluctuate as market conditions change. When sold, investments may be worth more or less than their original cost. Companies may reschedule when they report earnings without notice. 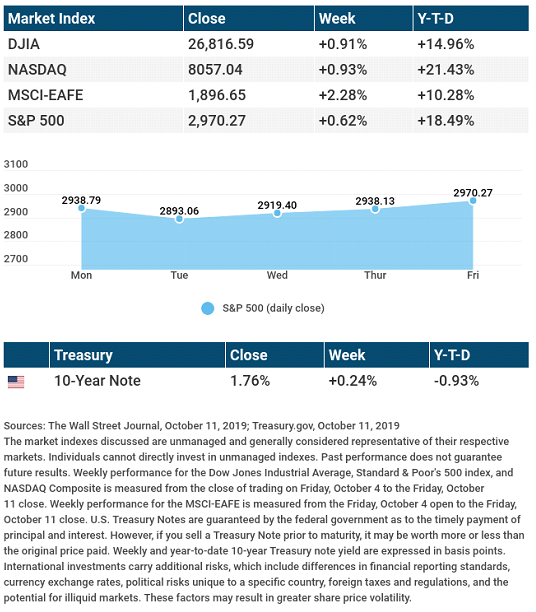